AN ARTICLE PUBLISHED ORIGINALLY BY MACKENZIE SIGALOS ON CNBC.

If you experience severe side effects after getting a Covid vaccine, lawyers tell CNBC there is basically no one to blame in a U.S. court of law.

The federal government has granted companies like Pfizer and Moderna immunity from liability if something unintentionally goes wrong with their vaccines.

“It is very rare for a blanket immunity law to be passed,” said Rogge Dunn, a Dallas labor and employment attorney. “Pharmaceutical companies typically aren’t offered much liability protection under the law.“

You also can’t sue the Food and Drug Administration (FDA) for authorizing a vaccine for emergency use, nor can you hold your employer accountable if they mandate inoculation as a condition of employment.

Congress created a fund specifically to help cover lost wages and out-of-pocket medical expenses for people who have been irreparably harmed by a “covered countermeasure,” such as a vaccine. But it is difficult to use and rarely pays. Attorneys say it has compensated less than 6% of the claims filed in the last decade.

In February, Health and Human Services Secretary Alex Azar invoked the Public Readiness and Emergency Preparedness Act. The 2005 law empowers the HHS secretary to provide legal protection to companies making or distributing critical medical supplies, such as vaccines and treatments, unless there’s “willful misconduct” by the company. The protection lasts until 2024.

That means that for the next four years, these companies “cannot be sued for money damages in court” over injuries related to the administration or use of products to treat or protect against Covid.

Dunn thinks a big reason for the unprecedented protection has to do with the expedited timeline.

It is very rare for a blanket immunity law to be passed. ...Pharmaceutical companies typically aren’t offered much liability protection under the law.

The quickest vaccine ever developed was for mumps. It took four years and was licensed in 1967. Pfizer’s Covid-19 vaccine was developed and cleared for emergency use in eight months — a fact that has fueled public mistrust of the coronavirus inoculation in the U.S.

Roughly 4 in 10 Americans say they would “definitely” or “probably” not get vaccinated, according to a recent survey by the Pew Research Center. While this is lower than it was two months ago, it still points to a huge trust gap.

The legal immunity granted to pharmaceutical companies doesn’t just guard them against lawsuits. Dunn said it helps lower the cost of the immunizations.

“The government doesn’t want people suing the companies making the Covid vaccine. Because then, the manufacturers would probably charge the government a higher price per person per dose,” Dunn explained.

Pfizer and Moderna did not return CNBC’s request for comment on their legal protections.

Remember, vaccine manufacturers aren’t the ones approving their product for mass distribution. That is the job of the FDA.

Which begs the question, can you sue the U.S. government if you have an extraordinarily bad reaction to a vaccine?

Again, the answer is no.

“You can’t sue the FDA for approving or disapproving a drug,” said Dorit Reiss, a professor at the University of California Hastings College of Law. “That’s part of its sovereign immunity.”

There are limited exceptions, but Dunn said he doesn’t think they provide a viable legal path to hold the federal government responsible for a Covid vaccine injury.

Bringing workers back to the office in a post-Covid world also carries with it a heightened fear of liability for employers. Lawyers across the country say their corporate clients are reaching out to them to ask whether they can require employees to get immunized. 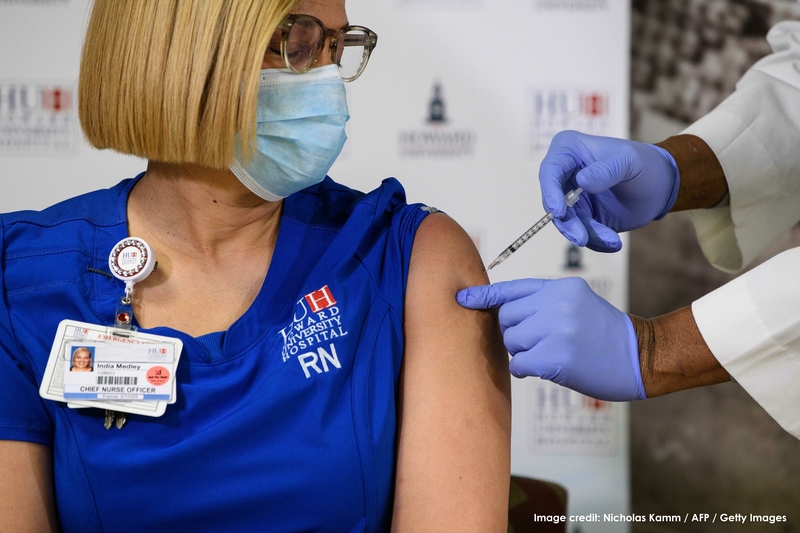 Dunn’s clients who run businesses serving customers in person or on site are most interested in mandating a Covid vaccine for staff.

“They view it as a selling point,” Dunn said. “It’s particularly important for restaurants, bars, gyms and salons. My clients in that segment of the service industry are looking hard at making it mandatory, as a sales point to their customers.”

While this is in part a public relations tactic, it is legally within an employer’s rights to impose such a requirement.

“Requiring a vaccine is a health and safety work rule, and employers can do that,” said Reiss.

There are a few notable exceptions. If a work force is unionized, the collective bargaining agreement may require negotiating with the union before mandating a vaccine.

Anti-discrimination laws provide some protections as well. Under the Americans with Disabilities Act, workers who don’t want to be vaccinated for medical reasons are eligible to request an exemption. If taking the vaccine is a violation of a “sincerely held” religious belief, Title VII of the Civil Rights Act of 1964 would potentially provide a way to opt out.

Should none of these exemptions apply, employees may have some legal recourse if they suffer debilitating side effects following a work-mandated Covid inoculation.

Attorneys say claims would most likely be routed through worker’s compensation programs and treated as an on-the-job injury.

“But there are significant limits or caps on the damages an employee can recover,” said Dunn. He added that it would likely be difficult to prove.

Mandatory vaccination protocols, however, may not happen until the FDA formally approves the vaccines and grants Pfizer and BioNTech or Moderna a license to sell them, which will take several more months of data to show their safety and effectiveness.

“An emergency use authorization is not a license,” said Reiss. “There’s a legal question as to whether you can mandate an emergency observation. The language in the act is somewhat unclear on that.”

The government has created a way for people to recover some damages should something go wrong following immunization.

In addition tothe legal immunity, the PREP Act established the Countermeasures Injury Compensation Program (CICP), which provides benefits to eligible individuals who suffer serious injury from one of the protected companies.

The little-known government program has been around for a decade, and it is managed by an agency under HHS. This fund typically only deals with vaccines you probably would never get, like the H1N1 and anthrax vaccines.

If a case for compensation through the CICP is successful, the program provides up to $50,000 per year in unreimbursed lost wages and out-of-pocket medical expenses. It won’t cover legal fees or anything to compensate for pain and suffering.

It is also capped at the death benefit of $370,376, which is the most a surviving family member receives in the event that a Covid vaccine proves to be fatal.

But experts specializing in vaccine law say it is difficult to navigate. “This government compensation program is very hard to use,” said Reiss. “The bar for compensation is very high.”

Also worrisome to some vaccine injury lawyers is the fact that the CICP has rejected a majority of the compensation requests made since the program began 10 years ago. Of the 499 claims filed, the CICP has compensated only 29 claims, totaling more than $6 million.

People who are harmed by a Covid vaccine deserve to be compensated fast and generously. The PREP Act doesn’t do that.

David Carney, vice president of the Vaccine Bar Association, said the CICP might deny a claim for a variety of reasons. “One reason might be that the medical records don’t support a claim,” said Carney, who regularly deals with vaccine injury cases. “We have to litigate a lot of really complex issues ... and provide a medical basis for why the injury occurred.”

Proving an injury was a direct result of the Covid vaccine could be difficult, according to Carney. “It’s not as simple as saying. ‘Hey, I got a Covid treatment, and now I have an injury.’ There is a lot of burden of proof there.”

There is also a strict one-year statute, meaning that all claims have to be filed within 12 months of receiving the vaccine.

“People who are harmed by a Covid vaccine deserve to be compensated fast and generously,” said Reiss. “The PREP Act doesn’t do that.”

Lawyers tell CNBC that it would make more sense for Covid vaccine injuries to instead be routed through another program under the HHS called the National Vaccine Injury Compensation Program, which handles claims for 16 routine vaccines. Known colloquially as “vaccine court,” the program paid on about 70% of petitions adjudicated by the court from 2006 to 2018.

And since it began considering claims in 1988, the VICP has paid approximately $4.4 billion in total compensation. That dwarfs the CICP’s roughly $6 million in paid benefits over the life of the program.

The VICP also gives you more time to file your claim. You have three years from the date of the first symptom to file for compensation.

“The VICP allows for recovery of pain and suffering, attorney’s fees, along with medical expenses and lost wages, if any,” said Michael Maxwell, a lawyer who practices in the areas of business litigation and personal injury. “Under the CICP, it’s only lost wages and out-of-pocket medical expenses. That’s it, unless there’s a death.”

The Covid-19 vaccines, however, aren’t on the list of eligible vaccines.