Lyme disease is considered one of the fastest-growing epidemics in the world. The Centers for Disease Control and Prevention (CDC) estimate that the number of people diagnosed with Lyme disease each year in the United States is around 300,000. [1]

Lyme disease may be characterized as a mystery condition that can mimic a wide range of disorders, with often physically debilitating and emotionally devastating symptoms.

These can include chronic fatigue, joint pain, dysfunctions of the gastrointestinal system, persistent inflammation and swelling of organs, neurological and psychiatric disorders, and immune-system deficiencies, to name a few.

The traditional view and treatment of Lyme disease is summarized on the CDC’s website as follows:

“Lyme disease is caused by the bacterium Borrelia burgdorferi and is transmitted to humans through the bite of infected blacklegged ticks. Typical symptoms include fever, headache, fatigue, and a characteristic skin rash called erythema migrans. If left untreated, infection can spread to joints, the heart, and the nervous system. Lyme disease is diagnosed based on symptoms, physical findings (e.g., rash), and the possibility of exposure to infected ticks. Laboratory testing is helpful if used correctly and performed with validated methods. Most cases of Lyme disease can be treated successfully with a few weeks of antibiotics. Steps to prevent Lyme disease include using insect repellent, removing ticks promptly, applying pesticides, and reducing tick habitat. The ticks that transmit Lyme disease can occasionally transmit other tickborne diseases as well.” [1]

While the above description of Lyme disease sounds like the condition is well-understood and treatment is pretty straightforward, people who have received a Lyme diagnosis typically find it very difficult to get well. In fact, their condition often significantly worsens once they start on a regimen of antibiotics!

This then raises the question whether that’s a sign of progress—an indication of a beneficial Herxheimer reaction that’s part of the healing process, or whether there may be other things at play.

Perhaps you have heard of Anthony William and his book, "Medical Medium—Secrets Behind Chronic and Mystery Illness and How to Finally Heal" [2]. Anthony reports that, since his early childhood, he has been receiving information from a voice identified as Spirit of the Most High, regarding medical conditions and how to heal them. He offers a completely different perspective on Lyme disease, stating that it is not caused by ticks, parasites, or bacteria, but is a viral infection.

“The true cause of what’s being called Lyme disease varies in each individual. People who have different varieties of Epstein-Barr can have Lyme symptoms, as can people who have HHV-6 and its various strains. People who carry any of the different strains of shingles can exhibit Lyme symptoms, with the non-rashing varieties causing the most severe cases, including symptoms such as brain inflammation and other central nervous system weaknesses.” ([2], p. 213)

Anthony notes that the viruses that cause Lyme disease symptoms thrive on antibiotics as well as heavy-metal toxins. They also have a variety of cofactors, to include Streptococcus A and B; E. coli; Mycoplasma pneumoniae, H. pylori, and/or Chlamydophila pneumoniae; toxic molds and the fungus Candida; as well as the bugs Bartonella and Babesia. The cofactor bacteria are typically already resistant to antibiotics and tend to become even more resistant over time. ([2], p. 221)

Based on Anthony’s insights, antibiotics would be a poor choice for treating Lyme disease. They will feed the viruses that cause Lyme disease and will have very little, if any, effect on their bacterial cofactors.

Most humans will get infected with some type of Herpes Virus, and in particular the Epstein-Barr Virus, at some point in their lives. The virus can lie dormant in the body and then emerge at a later time. It tends to hide in specific organs like the liver, spleen, or small intestines; ganglia of the central nervous system; or other areas where it can evade the immune system.

Physical or emotional trauma, poor diet, or exposure to prolonged stress or unhealthy substances will weaken the body’s defenses and strengthen the virus. The virus then emerges to inflame the central nervous system and reduce the immune system’s ability to fight it off.

In Medical Medium, Anthony provides the following prioritized list of the most common triggers (not causes!) for Lyme disease ([2], pp. 215-219):

It should be noted that tick bite is the least common trigger on the above list, accountable for only a very small percentage (less than half a percent) of Lyme disease cases.

How Bioenergetic Therapy Can Help

Since the NES-based information medicine system works strictly at the bioenergetic level, Lyme-related conditions can be addressed independent of whether they are caused by bacteria or viruses.

The body-field scan results shown below were obtained from a client suspected to have Lyme disease based on her symptoms, while she was waiting to see a Lyme expert for confirmation and treatment. Unfortunately, she did not pursue the bioenergetic therapy.
​
Top-priority Energetic Rejuvenators (ERs) show imbalances in the Spleen, Pancreas and Kidney organ fields, the toes, and the Central Nervous System; associated meridians are Spleen, Kidney, and Bladder which primarily relate to the immune and nervous systems.
​​

​Distortions in the Energetic Driver (ED) fields point toward issues with information transfer, detoxification, Kidney, Spleen, and Pancreas, as well as heavy metals (Aluminum was shown as top priority on the Environmental screen).

The Energetic Integrator (EI)-9 priority would indicate, among other things, a high level of stress; EI-9 is associated with the Triple Warmer meridian which governs the body’s stress response at the energetic level.

Energetic Terrain (ET) priorities are centered around aspects of the nervous system and vulnerabilities to viruses. ET-7 (CFS) in particular is closely associated with the Herpesviridae virus family.

Priorities in the Energetic Stars (ES) are focused around the immune system and detoxification, especially from heavy metals. 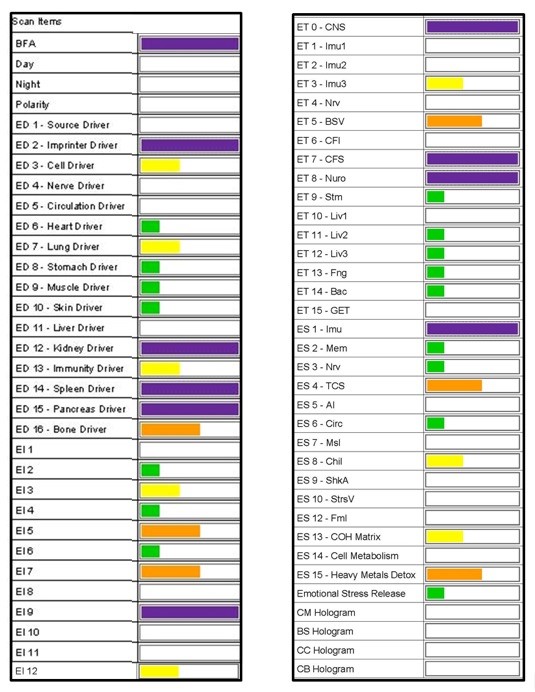 2 thoughts on “Lyme Disease And Energy Medicine: Is There A Cure?”